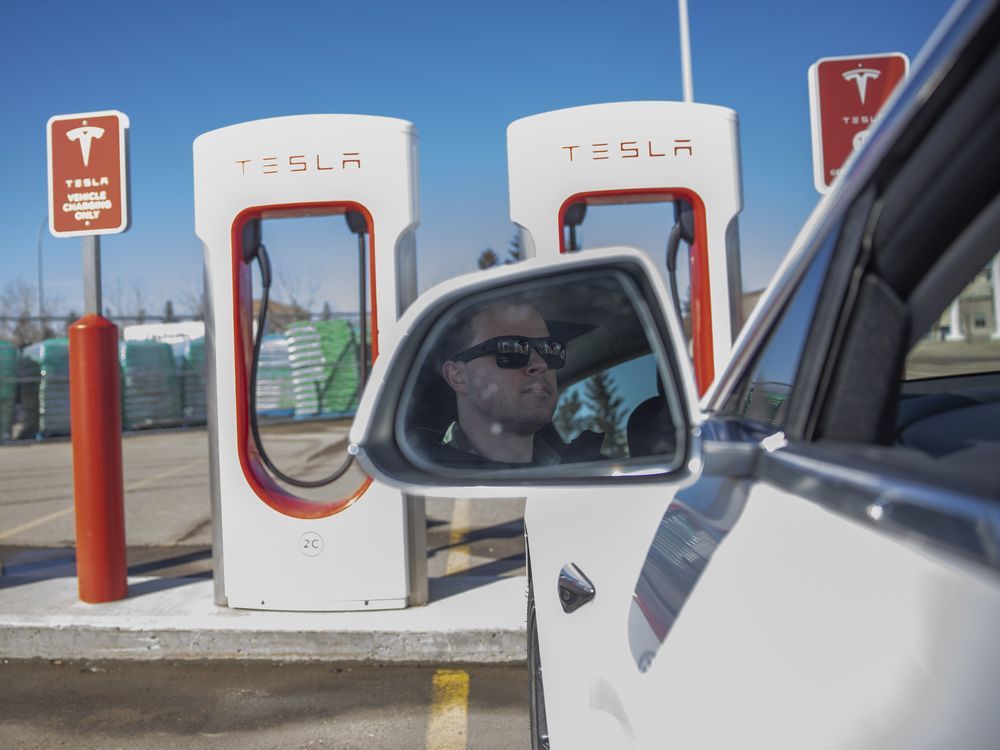 Nearly a year after the provincial government announced a $150 annual fee on electric passenger vehicles, electric vehicle owners continue to call for the tax to be removed.

“It would be great to see the Saskatchewan provincial government supporting more alternative modes of transportation,” said Matthew Pointer, founder of the Saskatchewan Electric Vehicle Association, on Friday. “A big one would be to eliminate PST on used electric vehicles.”

When the tax was announced last spring, there were 403 electric vehicles in Saskatchewan, which translated to just over $60,000 in annual revenue for the province.

Now Pointer says there are about 1,200 electric vehicles in Saskatchewan. That number is growing every day, but he said the EV adoption curve is still much slower than the association would like to see and that eliminating the tax is just one of many things the province could do to speed things up.

“There are a lot of myths and misconceptions about electric vehicles here in the province, and we think the government could do a better job of demonstrating the benefits of electrification,” Pointer said.

Pointer has driven an electric vehicle for four years and said he’s never had a problem, even in Saskatchewan’s harshest weather conditions. In a presentation to Regina City Council last month, he even went so far as to say it works better in the winter because it doesn’t need to warm up like a gas-powered car does. (Council recently approved an energy and sustainability framework, part of which aims to improve electric vehicle charging infrastructure in Regina and help educate residents about the feasibility of electric vehicles.)

He travels between Saskatoon and Regina at least twice a month. Although Tesla superchargers seem to be the most consistent, he said charging stations operate at temperatures as low as minus 40 or 50. And despite Saskatchewan’s heavy use of fossil fuels, an electric vehicle in Saskatchewan still produces 30 % less emissions than a traditional gasoline vehicle. vehicle, according to SaskPower.

He said there had been no such messages from the Saskatchewan Party.

“So far that flag is only 100% being waved by SaskPower,” Pointer said.

When asked to comment on the criticism, an Environment Department media relations officer referred the matter to SaskPower, which they say is “the government lead on electric vehicles, including communications around of their promotion”.

“We take an informational approach rather than a promotional approach because at the end of the day, we are the power company. We’re not an auto company,” Scott McGregor, a SaskPower spokesman, said in an interview Monday. “I can’t really speak for the government in this regard.”

“We did a lot of studies to understand what driving behaviors are, charging behaviors and in that sense we found that there was a discrepancy if you weren’t basically along the Trans-Canada or in a big center,” McGregor said.

Currently in its pre-application phase, where businesses, First Nations and municipalities were invited to contact if they were interested in installing a fast charging station to see if they meet the prerequisites and qualify program, SaskPower will begin accepting applications between April 6 and April 19.

The objective is to build 20 charging stations in areas that need them, with a minimum of two chargers at each station.

“The biggest problem is that we don’t have enough redundancy at the charging points in the province,” Pointer noted. “It would be a bit like having a pump at a gas station. If this pump fails for any reason, there will be issues with that.

He’s optimistic that SaskPower’s new program, along with help from the federal government’s zero-emission vehicle infrastructure program, will help close the gap. Pointer said the province would also benefit from a zero-emission vehicle mandate, which would require dealerships to sell a certain percentage of electric vehicles.

“I know change is very slow and difficult in this province,” he said. “We’re just banging our heads against the wall, trying to get the word out.”

Want to know how we decide what to cover and how editorial decisions are made at the Regina Leader-Post and Saskatoon StarPhoenix? Get the weekly Letter from the editor newsletter from editor Russell Wangersky and join the discussion on what’s happening in news coverage and commentary delivery, both in print and online. Click here to subscribe.

Sign up to receive daily news from Regina Leader-Post, a division of Postmedia Network Inc.

Thank you for your registration!

A welcome email is on its way. If you don’t see it, please check your spam folder.

The next issue of Regina Leader Post Headline News will soon be in your inbox.

We encountered a problem during your registration. Try Again