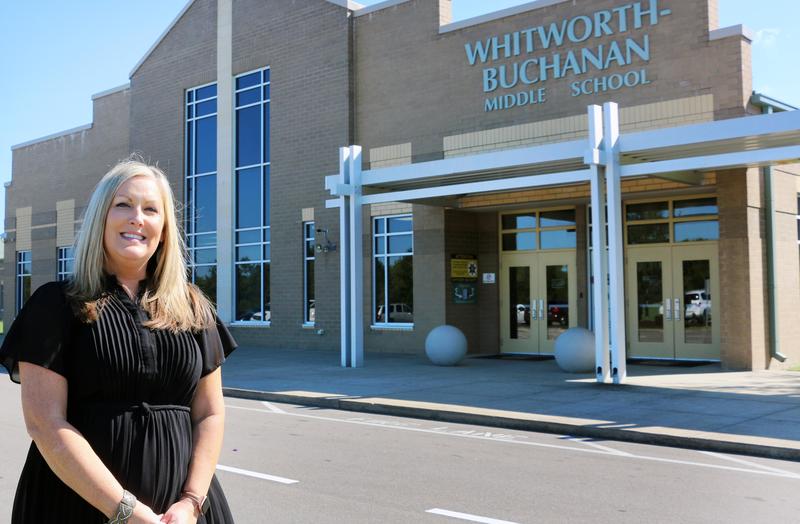 Now in her fourth year as principal of Whitworth-Buchanan Middle School, April Sneed has another honor to add to her school’s growing list of accomplishments and awards.

Tennessee’s Principal of the Year Award is given annually to a school principal for outstanding service in education and outstanding leadership that results in overall improvements in their school, according to TDOE. To qualify, applicants must have a minimum of one year experience as a principal and a minimum of three years experience in public schools. Additionally, all applicants must have a proven track record of exceptional gains in student learning.

“It’s a huge honor not just for me, but for my entire school community,” Sneed said. “I was originally chosen as RCS Director of the Year because of the significant improvement at WBMS, and it was a collaborative effort of my administrative team, faculty, staff, and parents. This honor is on my behalf, but it is truly an acknowledgment of the hard work of the entire Whitworth-Buchanan College community.

The state selects three finalists from each school division in Tennessee – East, Middle and West.

Principal of the Year finalists will proceed to an in-person interview to be held in the coming weeks where each will meet with a panel of interviewers comprised of department staff and other education officials.

The winners for each major division and Tennessee’s Manager of the Year will be selected from this pool and announced at the Tennessee Manager and Supervisor of the Year celebration later this fall.

Over the summer and under Sneed’s leadership, Whitworth-Buchanan Middle School was selected as a “model school” by the International Center for Leadership and Education. Schools are chosen by ICLE based on their rapid improvement and their ability to present streamlined, simple strategies to help other schools succeed. The application process is very rigorous, involving a written application, several panel interviews, and other selection processes.

Principal Sneed took over as director of Whitworth-Buchanan at a time when the school was listed by the state as in need of targeted support and improvements.

“Ms. Sneed has done an incredible job of rapidly changing expectations for academic behavior and performance at WBMS,” Principal of Schools Dr. Jimmy Sullivan said. school was identified as being in the bottom five percent of all Tennessee schools for performance with few student subgroups Changes at WBMS were noticed almost immediately with a particular focus on routines and procedures and standards-based instruction.

The school’s performance has skyrocketed since Sneed’s arrival.

Each year TCAP has been administered during his tenure, the school has been identified as a Level 5 school for student academic growth, which is the highest possible level. Additionally, the school received award school status from the Tennessee Department of Education last year.

“Congratulations to April, but also to the whole WBMS community because it’s an honor for everyone,” said manager Sullivan.