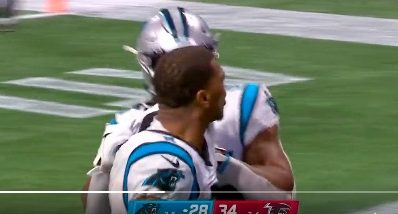 Carolina Panthers wide receiver DJ Moore had the biggest moment of his career on Sunday.

Moore had an incredible 62-yard Hail Mary TD catch for two Atlanta Falcons defenders with 12 seconds left in regulation to tie the game at 34. The resulting PAT would have given the Panthers a thrilling victory and put the team in first place in the NFC South.

Then disaster struck and it was all Moore’s fault. The star took off his helmet to celebrate the game and was soon flagged for unsportsmanlike conduct.

And when Panthers kicker Eddy Pineiro missed the resulting PAT attempt from 48 yards, Moore had gone from hero to goat in the blink of an eye.

That set up overtime, and the Panthers had a chance to win it, but Pineiro missed the potential game winner by 33 yards (coincidentally, about the distance of a conventional PAT). The Falcons then scored a field goal and won 37-34.

It should be noted that the Carolina quarterback PJ WalkerHail Mary traveled 67.6 meters in the air. This is the longest completion by air distance in the Next Gen Stats era (since 2016).

PJ Walker’s Hail Mary TD pass to DJ Moore traveled 67.6 meters through the air, the longest accomplishment by air distance in the Next Gen Stats era (since 2016).

So the Panthers and their fans could have spent the next week talking about this incredible achievement and celebrating their team in first place. Instead, everyone is pondering Moore’s premature penalty.

NFL fans haven’t been kind to Moore on Twitter.

DJ Moore just after being called for a 15-yard penalty that cost his team a regulation victory. He took his helmet off just after scoring the equalizing TD, and the penalty forced the XP miss from 48 yards. pic.twitter.com/2vRslvmclS

DJ Moore’s penalty officially cost the Panthers a win, so they should probably punish him by trading him to the Packers

DJ Moore? Rather DJ Moron! Cost your team a win in regular time so you can get time against ATL??

The children will be marked by this preventive defense, not by DJ Moore who takes off his helmet after a sick take

DJ Moore
Hero and Bum at the same time.