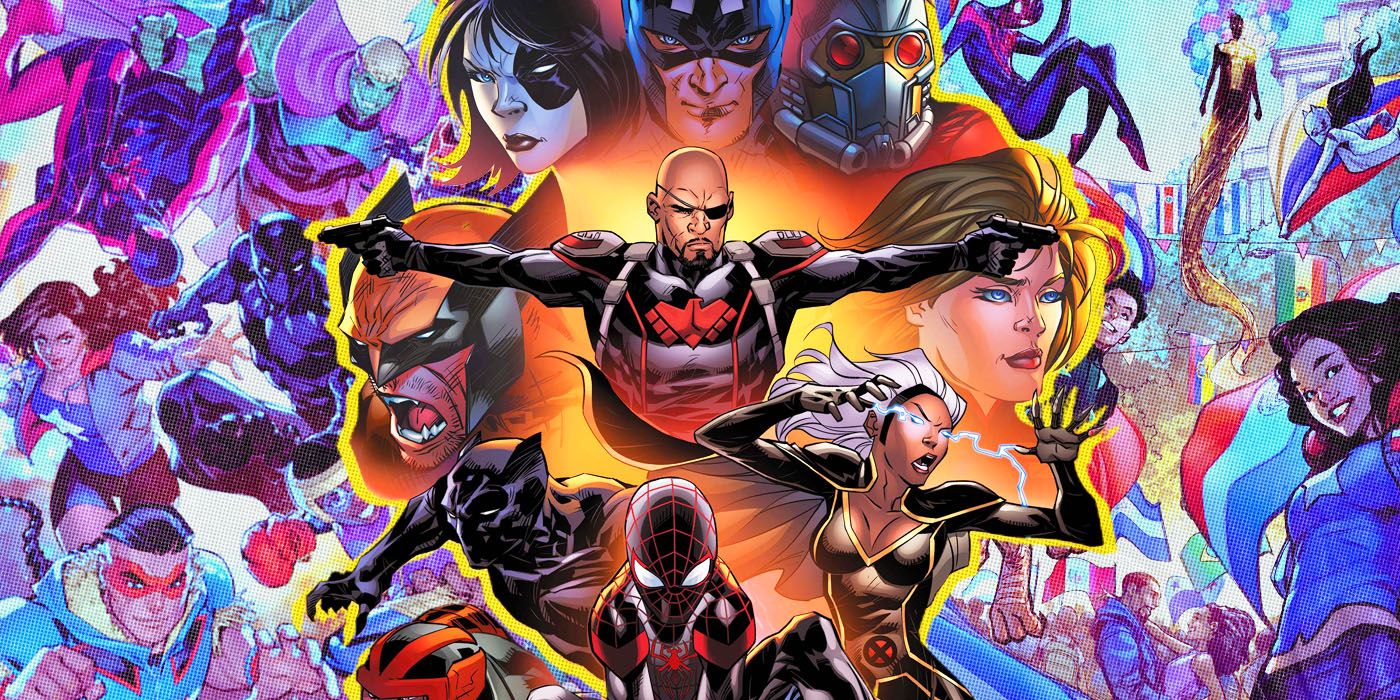 CBR reports LIVE from New York Comic Con 2022 and seated at The Voices of Marvel panel for all in-store announcements, reveals and discussions.

The panel will be moderated by writer-editor Angélique Roché with her guests including Eve L. Ewing, John Jennings, Danny Lore, Steve Orlando, Cody Ziglar and The Voices of Marvel editor Sarah Brunstead.

Roché kicked off the panel and welcomed everyone in attendance, saying announcements were on the way. The crowd applauded each creator as they took the stage.

After giving the context and explaining The Voices of Marvel 5-Year History and Promising Panel Participants Exclusive NYCC Variants of The Voices of Marvel #1, a Luciano Vecchio cover. A video was then released showing characters like Miles Morales and America Chevez to promote the comic book line and its upcoming Hispanic Heritage one-shot, Marvel’s Voices: Communities #1. The book will feature the work of many talents, including Fabian Nicieza, Edgar Delgado and many more.

“I’m very excited for this one,” Brunstead said while giving details on the creation of the one-shot.

The next cover shown and the ad was a Voices of Marvel: Legacy trade paperback coming October 2022, followed by the reveal that The Voices of Marvel podcast will continue past its sixth season. “Our podcast seasons continue and we will be back in 2023,” Roche said.

Also said that a new line of Infinity Comics – exclusive Marvel Unlimited webcomics – is on its way to The Voices of Marvel.

Another video started playing on The Voices of Marvel, preaching the message to fans that “anyone can be an artist” and “anyone can draw”. The video was about a Black Panther artistic series.

After the video, Roche promised that the announcements would begin. The moderator reminded The Voices of Marvel origins of the podcast and wanting to tell stories about LGBTQIA+, BIPOC and other communities.

The first announcement was that a The Voices of Marvel: Wakanda Forever #1 will be released in February 2023 as part of a push to tell more individual character stories. Miles Morales will also receive a new series ahead of December 2022, Miles Morales: Spider-Man #1, which Ziglar writes with artist Federico Vicentini. Ziglar spoke about the title during the panel and took Miles “back to his roots,” but also gave the hero new black mentors to look up to and learn from.

work for Miles Morales: Spider-Man was shown, just before the announcement that Monica Rambeau/Photo would get a new series in February 2023, Monica Rambeau: Photon, written by Ewing with illustrations by Luca Maresca. “Monica is one of the most powerful heroes in the Marvel Universe,” Ewing told the crowd how she really wants to explore the heights of her power, something she says has never been seen before. previously.

Ewing also promised “cool cosmic stuff” to readers who picked up the book. Cover art for the title’s second issue was shown, teasing the Avengers’ involvement with members like Captain America, She-Hulk, Thor, and Black Knight.

The next step was My superhero is black, a new book by Jennings and Roche with a cover by Natacha Bustos. After Jennings spoke about the book, Roche said the book doesn’t just focus on the comics industry, but also the entertainment industry, history, social movements, both at times wartime and peacetime and more.

Jennings brought Silver Surfer “And We Will Cry For Him” ​​arc, about a character who sacrifices himself to save the world. This character, Al B. Harper will now be resurrected in the title and transformed into a new superhero: Ghost Light. Designed by De Landro, the character will have nano cloud powers.

The next step was scarlet witch #1 released January 2023 by Orlando artist writer Sara Pichelli. “She’s going on a trip,” Orlando said of the book. He recounted Wanda’s experiences in books like House of M and the recent Darkhold saga. Orlando said Wanda will turn her negative experiences into “fuel” to help others who have fallen.

Orlando also joked about how weird Wanda’s family is, between Magneto, Vision, Wiccan and Speed, before saying that Wanda will travel the Marvel Universe to become a character she needed to take on her own at times. earlier in his life. “Wanda is powerful, but she’s not unbeatable,” Orlando said, teasing the challenges along the way for the hero. Also revealed for scarlet witchin the second issue, she will enter the Dreamscape with the Vision family.

Orlando then began to discuss Marauders #8, the panel showing the issue’s artwork, before the mutant talk shifts to the reveal of Bishop: College of War #1.

The first issue will be released in February 2023, the title will explore the mutant hero of the same name. The series is written by J. Holtham with art by Sean Damien Hill. “By the way, this is an amazing comic,” Orlando added to buzz about the book. A video of Holtham started playing, who said she was thrilled readers were picking up the book.

After that came Crypt of Shadows #1, and one-shot anthology that will feature a story centered on Bloodline, Blade’s newly introduced 2022 daughter. Lore spoke about the included Bloodline story, with cover art shown.

The announcement then came that Lineage: Daughter of Blade #1 – featuring art by Karen S. Darboe and written by Lore – has an official new February 2023 release window. While discussing the project, Lore began to rip and share her experiences watching the Blade movies with her father when she was younger. “There’s nothing I love more in the world than building a world with more people like the people I grew up with,” Lore said, saying there was no way she could. say “no” when given the chance.

Lore went on to talk about Bloodline and how she was forging the character in a story that had her facing public misconceptions like others thinking she was angry when she was actually happy as a result. based on her appearance, while thinking that she was natural. “troublemaker” when she wants to help others.

After Linethe infinity comic Voices of Marvel: Werewolf of the Night #19 was brought up and discussed by Brunstead. A brief video then played on Nova, with the conversation moving to talk about another Infinity Comic, Voices of Marvel: Nova #20, released Wednesday after NYCC.

Brunstead talked about how Infinity Comics allows stories that normally aren’t in print all the time, mentioning genres like Romance and the like.

“If you haven’t checked out the Infinity Comics, they’re really dope,” Ewing said, encouraging the crowd to check them out. “They’re super fun.”

Then, episodes from the last season of The Voices of Marvel podcast, explaining how the show continues to grow and interviewing guests from around the world and other countries. Select episodes – 35, 36 and 37 – were posted for the podcast with James Kim and Alejandro Lopez, Juni Ba and Mohale Mashigo, respectively.

Roche then discussed an upcoming interview with Stormbreaker artist Peack Momoko, which was done in both English and Japanese. The audio was the reading of the interview with Momoko speaking in Japanese with an English translator (Momoko’s husband) about her demon days saga.

From the panel, the next The Voices of Marvel podcast to be released is episode 39, an excerpt of which was shown for panel guests.

After a thank you to the crowd and the panelists in attendance, the panelists began talking about what excites them about the future. Said by Jennings, one thing he looks forward to is “building new windows” for storytelling and a variety of stories. Orlando teased a project announced for 2023, saying one of the things he’s most excited about is how comic book audiences are changing over the years.

After the panelists shared what excited them about the various announcements and going forward, the panel ended.