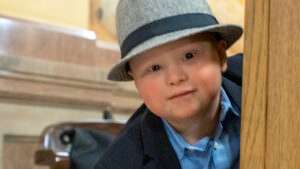 TOPEKA — It’s tough for 6-year-old Crosby Orlando to stay in his freshman class.

Born with Down syndrome, he has been in therapy since he was four weeks old to work on behavioral and communication barriers. Orlando is mostly non-verbal and uses signs to communicate with his classmates, although he is restless and wants to run around. Once, he even escaped from his Shawnee Mission school.

His mother, Sara Jahnke, said she used to feel guilty about the amount of resources Orlando needed as a child with extra needs in a classroom. Jahnke said she then realized how beneficial being in a classroom was for him and his classmates.

“They know he’s different and they learn to love him for those differences,” Jahnke said. “Crosby being in the classroom is fantastic. This pushes him to do better, to learn, to grow. But it’s also teaching classmates a lesson in compassion and acceptance.

Kansas law requires the state to provide 92% of additional special education costs, but the legislature has not met the requirement since 2011, according to the Kansas Association of School Boards. KASB said the current level of funding is 71% statewide and districts must divert funds from general education programs to pay for special education fees. KASB estimates the funding gap to be around $160 million.

The KASB held a press conference Thursday at the Statehouse, following a legislative committee hearing on special education funding, to urge lawmakers to act immediately.

Olathe Public Schools has about 30,000 students enrolled, more than 5,000 of whom receive special education services, according to Anjanette Tolman, executive director of Olathe Schools Special Services. Tolman said the school district was only 54% funded last year and had to use more than $28 million of its general budget to cover the difference.

Tolman calculated that the district could hire 350 more certified staff, improve school programs, and increase the salaries of school employees if special education was funded in the required amounts.

With Kansas posting a record surplus of more than $2 billion, educators said lawmakers have no excuse not to fully fund special education.

“For the past few years, the budget situation has been the reason they haven’t done it,” said Shannon Kimball, president of the Lawrence School Board and chair of the KASB legislative committee. “You can’t blame the budget now, so now they’re looking for other excuses not to fund it. The state has plenty of money to meet these needs.

Revenue estimates released this week projected an additional surplus of $800 million for the current fiscal year and $400 million for next year. Adam Proffitt, budget director for Governor Laura Kelly, said Kelly will address special education funding in her January budget.

“Some of the other things she talked about are fully funding special education,” Proffitt said during a state revenue forecast announcement Thursday. “I don’t know what that policy will look like, but it’s something we’ll be discussing later this month and early December.”

Trabert said school districts were unaffected by the lack of government funding for special education.

“Our review of the facts indicates that there is no shortfall in funding schools for special education or general education,” Trabert said in testimony before the committee. “Many students may not be getting the education they deserve, but it’s not for lack of funding.”

“There are groups that pick data and present it as fact,” she said in an interview after the hearing. “During this time, they are presented as experts, and the real experts who work for the Kansas State Department of Education – who are the real authorities on special education funding – are interviewed, belittled and rushed to say where they got their data.”

“I think ultimately their goal is to cut public funding in general, and they see that as an avenue that they can try to attack,” Kimball said.