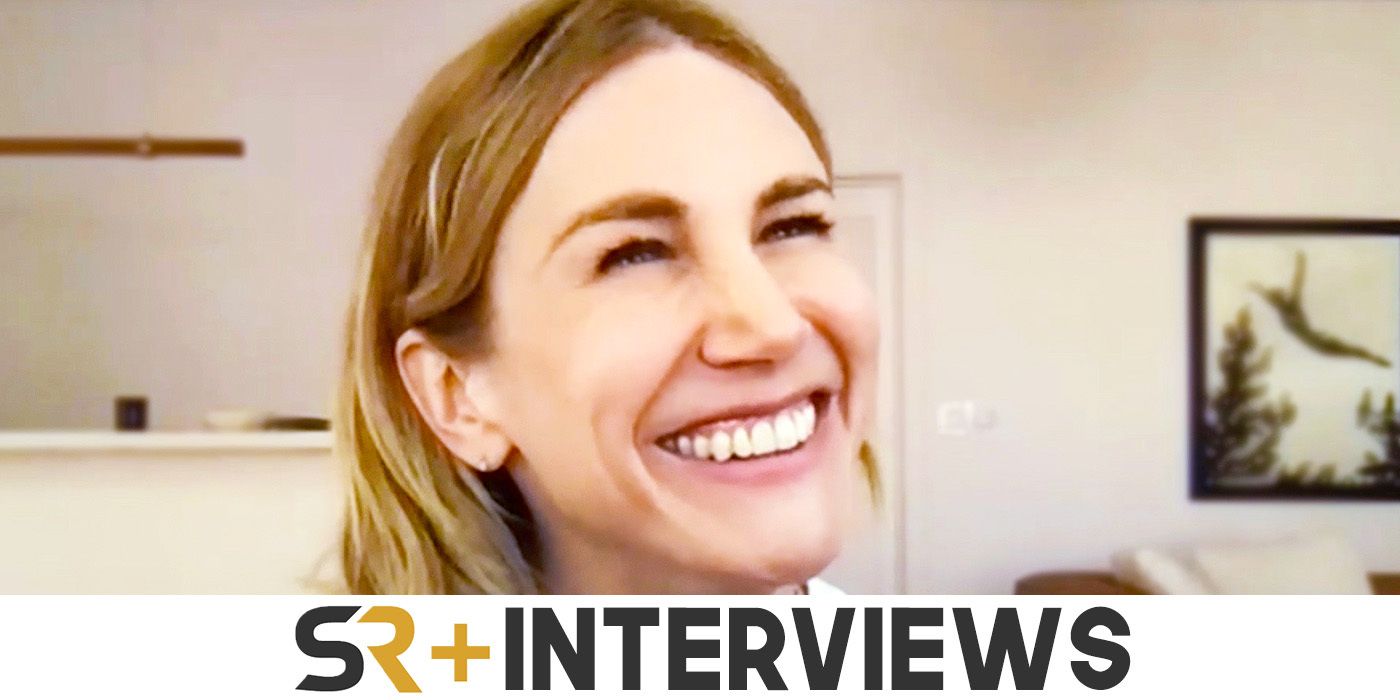 Yellowstone Season 4 on Paramount+ has been a streaming dynamo, becoming one of the most watched and talked about TV series right now and has just made its debut on Blu-ray/DVD. Created by Taylor Sheridan, Yellowstone stars Kevin Costner as John Dutton, the patriarch of Yellowstone Ranch, Montana’s largest cattle ranch. The drama series revolves around the Dutton family and their attempts to keep their land, while battling local and outside interests. In addition to Costner, the show stars Kelly Reilly, Cole Hauser, Luke Grimes, Wes Bentley, Kelsey Asbille, Gil Birmingham, Forrie J. Smith, Ryan Bingham, Jefferson White and Denim Richards. Jen Landon plays Teeter, the female hand of the ranch who more than fits her place surrounded by the male-dominated world she lives in, providing comic relief, as well as a character who challenges the status quo.

Screen Rant spoke with Jen Landon about her trip to Yellowstone season 4, including how the show changed her personal and professional life, how she addressed Teeter’s masculine and feminine traits when she was offered the role, why she thinks Teeter is attracted to co-worker Colby, and what what Yellowstone really means to the character.

Jen Landon: I’m so in your room.

If you are a movie or TV fan this is for you for sure.

Jen Landon: Alright, alright. I’m not gonna watch all the stuff, but like, I’m really into it.

It’s kind of like a nerd museum in many ways. You could literally soak in it. There are poster art from pretty much all over the world, all over my film travels.

So every time I see you on Yellowstone-I watch the show with my fiancé and we love it to bits-every time Teeter shows up, we’re both like “Teeter! Waver!” We shout it every time. We can’t help it. It’s a natural thing. Every time you are on screen. I’m just curious, does this happen to you in real life? Like, places where you’re outside and there are fans and they say “Teeter!”

Jen Landon: No… well, go ahead…

Because that’s what I would do. I say it like that. I’ll be that boring guy who goes “Teeter!” and you’d be like, “Oh my god, this guy-“

Jen Landon: No, so I’m not recognized, because I think I look so different for some reason. I register as different. The people I work with don’t recognize me when they see me. They’re like, “who are you?” and I’m like, “It’s Jen. It’s Teether. And they’re like, “What?”

When I had pink hair in Montana, it happened a couple of times and it was just like that and I loved it, because it was like these young guys were driving and I was putting gas in my car and they were like “Teeter!”

Yes! I mean, you have to have pink hair, I mean obviously it will. So this show is huge, Yellowstone has exploded. It’s great. How much has it changed your life and career just by being a part of it? You entered Season 3 and now you’re just a stock character with this whole set. How is it for you? How did that happen ?

Jen Landon: I think it changed my life in ways that I’m not aware of and that will come to light. Because you’re not on the outside and you’re not at the point where it’s spilling out into the world. So for me, my experience is like the actor who was employed, who was unemployed, who changed shows, who did a ton of TV episodes. For me, it’s so nice to feel like I have a home and I’m already grieving, the kind of loss of that home in advance, because everything has to end. And, I mean, well in advance. But, yeah, it’s just amazing to feel like I have a home, and also, I don’t like being in LA, where I live. I took a sabbatical from acting and went to live on a cattle ranch in Montana ten years ago, in Paradise Valley, so that was perfect for me.

Jen Landon: And basically when we film these animals, it’s these animals and we work with them and so it’s like a perfect fit.

So, I want to talk a bit about the character here. Like I said I’m watching this with my fiancé and we talk about it together and we really talked about how Teeter she balances being feminine and masculine at the same time in this male dominated world but she pulls it off always to never really need to be either. She feels like one of the few characters who actually knows who she is, so I’m curious how this character was introduced to you when you got the role and how much did you add to it by playing her?

Jen Landon: Yes. By the way, you got it all, because I was talking to someone earlier about sex not even being a thing for her. This is simply not the case. It is like something pre-societal. She’s so animalistic that way. That’s how you know somebody’s just a fucking genius is I had a scene to audition and there was a character description and, you know, you get stuff from character description. But, in that two-page scene between the acting and the way she listened and responded to the people she was talking to, you got, for me, I knew – I tried this and it became incredibly clear to me and it’s really beautiful writing. And I felt like it was just a really good game. There are a lot of parts of me that, like-there are a lot of similarities between Teeter and me. It’s just a really good fit. I’ve always done guy stuff. I didn’t like that there were guy stuff to do and girl stuff to do. It made me feel weird growing up and I didn’t really like girly stuff-

[Laughs] We need to get Teeter in a monster truck for season 5. If we can just make it happen.

The funny thing is that you say that, I see it. I can see her pause in Bigfoot, “Hey, what are you doing?” I can see it.

Jen Landon: Yeah! She loves monster trucks and she loves going to monster truck shows wherever they are. She wants to see things start from high things and land.

That’s hilarious. So, I have to talk about Denim Richards, who plays Colby. He initially rebuffs Teeter’s advances, just like no. But, he really seems to be warming up. Is it just because you broke it? And then also, what is it about Colby that you think Teeter is chasing? She basically has the choice of the litter, but she goes after Colby. What do you think attracts her to him?

Jan Landon: Man, I think there’s a lot and there’s a lot to talk about, but I knew she was going to hang on to him and so when I read it in the script, I I was like, “yup.” You know, there’s something where she can really ruffle her feathers. He’s got a lot of feathers to ruffle, see? There’s a kind of, I always thought there would be a kind of unspoken connection that neither of them would talk about, which is the function of being a bit of an outsider. John Richards. Colby stands out. Teeter stands out.

Jen Landon: Do you know what I mean? So I think there’s this unspoken relationship there. And, I don’t know about Teeter, like “no means yes” and I don’t want to do that. There is simply no ego. There’s no, like, her being rejected by him is going to be like, “Oh, my feelings are hurt, this is going to make me unsure.” It’s just like, I’m just gonna keep doing this stuff and you’re an idiot if you don’t take it. Like, what time is a good time, man?

Thus, Teeter frequently serves as comic relief throughout the series, but she also has some very serious moments, especially with this season as she fights to stay at the ranch, citing her commitment and, especially now that she bears the mark. So what do you think Yellowstone means to Teeter? Why is she fighting so hard to stay there?

Jen Landon: Yeah, I talked to Taylor about it a bit in season three and we had the same idea that Teeter was raised on a sheep farm, older brothers, probably no mom, real sense of family . And, I felt like she kind of lost that family to a bunch of different issues and she’s been a mobile worker ever since, moving from ranch to ranch, you take jobs here and there, and she’s so crispy and guarded and all that, but she really craves that sense of family and she found that family at the Dutton Ranch. And, I always imagined that she didn’t really want to go anywhere else.

Impressive. Jen, that’s all the time we have. I’m so relieved to have been able to talk to you today. We love the show. I like Teether. It’s so awesome, so thank you so much and I can’t wait to see you more.

Jen Landon: Thanks, man. Good conversation with you.

Next: Does Yellowstone End With Season 5?

Yellowstone season 4 is available now on Blu-ray and DVD and will begin streaming on Peacock on March 28, 2022.

Paul Shirey is Senior News Writer for Screen Rant. A former editor of JoBlo.com, he has over a decade of writing and reporting on the entertainment industry and has covered everything from Comic Con to CinemaCon to Star Wars Celebration, as well as many tours. trays and junkets everywhere. the world. He is passionate about movies, comics, television and spends way too much on collectibles. A proud father, combat veteran, dog lover, gym rat, coffee enthusiast and equal-opportunity donut eater, you can follow his daily exploits on Twitter and Instagram, as well as YouTube videos on The Arctic Ninja Network.