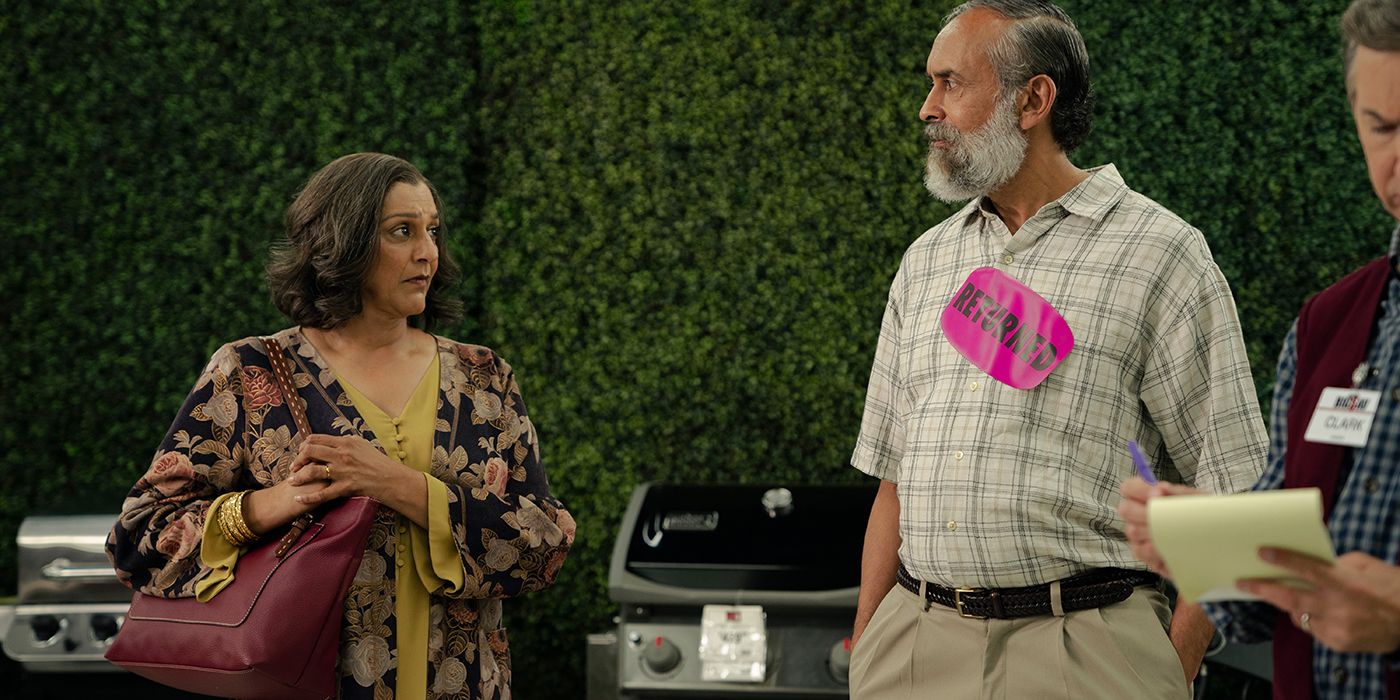 Roaravailable April 15 on Apple TV+, is a new feminist anthology series from GLOW creators Liz Flahive and Carly Mensch. Based on Cecelia Ahern’s collection of short stories, the show is made up of eight individual episodes that take place in separate worlds but remain thematically connected. Each episode of the darkly comedic fable focuses on an ordinary woman in the midst of extraordinary circumstances, with a different genre coloring each segment – from magical realism to psychological horror to sci-fi.

One of the most moving episodes of Roar anthology is “The Woman Who Returned Her Husband,” which seems pretty self-explanatory thanks to its title. It stars Meera Syal (Yesterday) as Anu, an older Indian immigrant who feels stuck in her lackluster marriage. Given the machinations of her world, she is able to simply dismiss her husband Vik (played by Bernard White, big sky) to the store where she bought it when she found her purchase receipt. But was he the one holding her back or is she in charge of her destiny?

Syal spoke to Screen Rant on the perfect mesh of cultural specificities and universal themes in Roarand on building a loving but complicated dynamic with her on-screen husband.

What did he tell you first Roar? How did you hear about it and what made you want to play “The Woman Who Returned Her Husband?”

Meera Syal: The first time I heard about it was when my agent said to me, “We had this incredible scenario, and I would like to tell you about it. I read it and I was like, “Oh, my God. What an amazing script.” Is it rare to be offered a role like this for a woman who looks like me and my age? Yes please.

I just imagined that I would have to do several months of auditions. But then I was on a Zoom call with all the creatives, chatting, and I was offered it at the end of the call. And that never happens, so I guess all the spells I’ve done before must have worked. There are a lot of witches in this series, so I think there was something wizarding or something going on. But I feel very lucky to have played in the series.

I was reading how the script had strayed from the seed that was Cecelia Ahern’s collection of short stories, and part of that involves incorporating immigrant perspectives on divorce as well as generational and cultural divides. How did you want to bring out this aspect of the script?

Meera Syal: It totally spoke to me. What a brilliant way to highlight the real undercurrents of this story by putting it through this cultural lens. Because you’re putting it in a community where leaving a marriage is still considered a taboo for some women, and that makes the stakes so much higher with this community pressure to just stand up and shut up.

And this is not new; our grandmothers knew it and our aunts knew it. It may be different for our generation but, I think across the generations, it has happened to all women. You’re just not supposed to say “I’m unhappy” and then do something about it. I think there were so many things there that translated really beautifully into a South Asian situation, but still kept it absolutely universal.

I love that you have this struggle there between wanting to keep the community happy, but also wanting to do what’s right for you. This pull between desire and duty, I think, is truly feminine. It affects us as women in so many other aspects of our lives, not just marriage.

I like what you just said about making other people happy versus doing what’s good for you, because there was a very strong line between happiness and stamina throughout the episode . Thankfully, though, there are plenty of lighthearted moments. What was it like working through the highs and lows of a 37-year marriage with your returning husband?

Meera Syal: What was really helpful is that the lovely actor who played Vik, Bernard White, once played my husband in a short film. Isn’t that lovely? In fact, he emailed me out of the blue after I got the part to say, “Guess what? I’m going to be your husband again.”

We already had a very nice shorthand from the last time we worked together. It is so pleasant to work with him; he’s such a sweet soul and he has this wonderful melancholy that fits the character so well. It was really helpful.

And also, we were leaning on all of our experience as people of a certain age who have been through all of these ups and downs. We have it. I grew up surrounded by so many disappointed women – not so much my mother, but my aunts. You sat like a child and heard them talking. You go, “Oh my God. I’m in a room full of unfulfilled potential. This is tragic.”

These women are bright, bold and amazing, and they have so much ambition – and look what happened to them. I would say that for me, it was an incentive not to be like that. I think that’s why I burst out pretty early on and said, “Hey, I’m gonna run away and join the circus.” Because I didn’t want to be like that at 60.

He was leaning on all of that, really, for Anu. And the fact that there was comedy was wonderful, because I think you can say as much about comedy as you can about tragedy – sometimes more, in fact. The moment where comedy and tragedy collide is where most of us live. It’s this weird pain zone, what life looks like to me. It seemed like the right tone for the story, actually.

I found it very interesting that even though your daughter doesn’t appear much in the story, she’s an important tipping point early on. What can you say about Anu’s relationship with his daughter?

Meera Syal: I think that’s absolutely true. All that triggers this questioning in Anu is that she sees her daughter living a life she never had. Her daughter is pursuing an artistic career, and she is in the world. Deep down, Anu didn’t live that life.

I have a daughter myself, and there’s always a moment when you suddenly look at them and say, “Hey, you’re a grown woman. You’re not just a grown woman, but you do things that I never had a chance to do.” There’s this mixture of incredible pride and also slight sadness, because you grew up in another era and those opportunities weren’t available.

I got it all, actually. And I think the fact that they’re still very close, and it doesn’t affect the relationship, is also very good. It’s not about rivalry; it’s just kind of a kick in the ass, because your mortality is approaching. She has just celebrated her 60th birthday; probably two-thirds of his life is gone. And she thinks, “Is this the rest, or am I going to change it?”

Even if there is not necessarily a shared world in Roar, all these women are in situations of strange and magical realism. Have you ever seen the other episodes or read the stories they are based on?

Meera Syal: Neither. Unfortunately, I didn’t see any of the others. They all drop at the same time, so I’m going to be as thrilled as you are. I’m really excited.

I know what this is about. I’ve read the synopses of all the episodes, and they all sound fantastic. And I didn’t know about Cecelia’s anthology until I got the part. Then, of course, I read it and was blown away. I thought, “God, what a brilliant marriage of a great book to a great TV series.” It’s a really good choice, because she created this extraordinary world through the female gaze, and yet you can have so many different genres in each series. There’s magical realism, psychological horror, romantic comedy – but they all tell the same story.

It’s about a universal woman, and all of these experiences that we’ve had as women, but they’re just explored in very different ways. It’s really clever.

There is also so much female energy on set, between the writers, directors and producers. Did it feel different or special while you were working on Roar?

Meera Syal: It really is. Actually, it was just kind of the shorthand that you have, because you talk about things that as a woman you know. You have been there; you felt it. Whenever I mention to friends what this story is about – that it’s about a wife who fires a husband because she finds a receipt – they all burst out laughing. It’s like, “Okay, you already have it.”

It was that kind of shorthand that we have as an all-female team telling the stories. And I think this is the first time I’ve been part of an all-female creative team of writers, producers, and directors. It is a rare and beautiful thing.

Finally, what’s next for you? What do you hope to work on next or what are you already working on next?

Meera Syal: In a few months I’m starting a series here in Britain about a middle-aged Indian detective. So it’s interesting. And then I still hope to do a play next year at the National, written by a great friend of mine – also about an older Indian woman.

After years of being the wrong age and color, suddenly it seems to be in style. [laughs] I do not know why.

Roar offers an insightful, poignant, and sometimes hilarious portrait of what it means to be a woman today. Featuring a unique blend of magical realism, familiar home and work scenarios, and futuristic worlds, these eight stories reflect the dilemmas of ordinary women in accessible yet surprising ways. The way they emerge from their respective journeys speaks to the resilience that exists within themselves and with all women.

Discover our Roar interviews with stars Merritt Wever and Fivel Stewart as well.

The eight episodes of Roar premiering April 15 on Apple TV+.

Tatiana Hullender is a writer at Screen Rant, specializing in film and television, as well as a co-host of several podcasts. In the interviews she conducts for Screen Rant, she explores what drives each creative mind and how different experiences influence the same narrative. A graduate of Columbia University in New York, Tatiana studied theater and comparative literature. She has been passionate about all kinds of storytelling since being exposed to Jane Austen and the BBC adaptations of her work. But satirizing Regency manners isn’t the only genre she enjoys, as a love of comic books naturally morphed into a love of cinematic universes and their superheroes. As long as a story has heart and humor, there’s a chance you’ll find something to enjoy telling it. Visit @myrcellasear on Twitter to follow Tatiana’s articles, interviews and podcasts, including: The Flash Podcast, Pop A La Carte and Ladies With Gumption. Subscribe to them on the Podcast app or contact her directly at paint(dot)out(at)gmail.com.