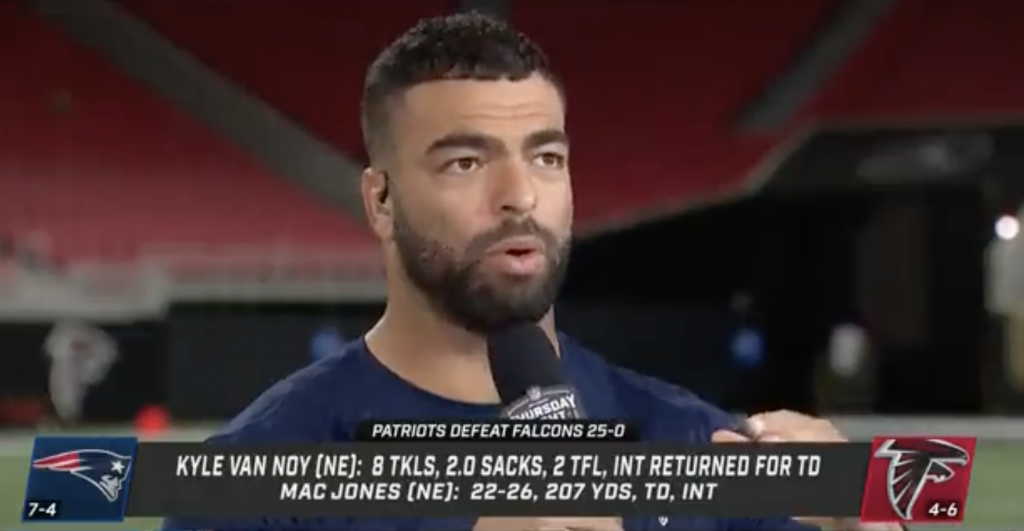 The New England Patriots beat the Atlanta Falcons 25-0 Thursday night. It was a pretty miserable night for the Falcons, whose three different quarters all threw interceptions. Meanwhile, Mac Jones looked solid and the Patriots’ defense absolutely put down Atlanta.

Pats linebacker Kyle Van Noy led the attack with eight tackles and two sacks on the night. His reward was making an appearance on the NFL Network post-game show to talk about the dominant performance.

During this chat, which was filmed live in front of a group of remaining fans in the Mercedes-Benz stadium, one of those fans, presumably a Falcons supporter, decided to intervene with colorful language.

It’s not clear exactly what the disappointed Falcons fan was saying, but you can certainly make out a “*** mother” and a “*** hole.”

As the studio team tried to regain some composure, it was Van Noy who made a perfect comeback, saying “I’d be crazy too.” You go from a 28-3 loss to tonight.

A fan in the crowd tried to come to Kyle Van Noy and he fired RIGHT BACK?

As for what he’s referring to when he brings up 28-3, well, you don’t need to remind Falcons fans that.

Kudos to Van Noy for his poise and quick wit during the live broadcast. And it just goes to show that there really isn’t any situation where the Falcons can have one against the Patriots these days.