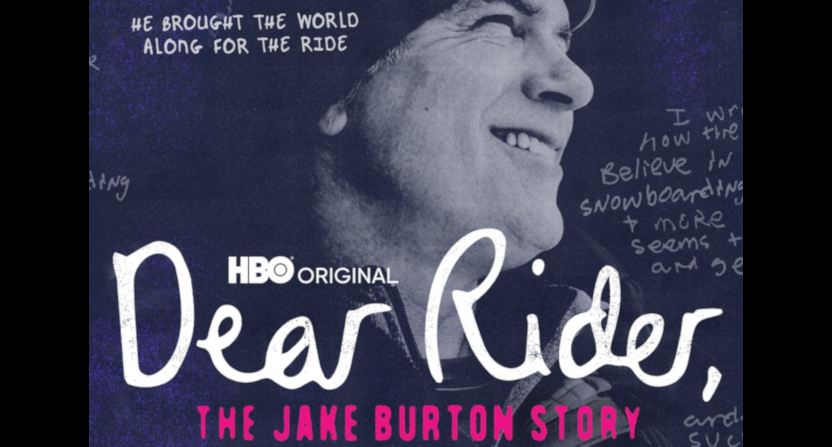 A feature-length documentary about legendary snowboarding pioneer and innovator Jake Burton Carpenter arrives on HBO on November 9. Dear rider is a Red Bull Media House production, and is directed by Fernando Villena, whose previous director credits include Any of us (a great look at the spinal cord injury and recovery journey of famous mountain biker Paul Basagoitia in 2015) and Give voice (a documentary about the annual August Wilson Monologue competition that gives high school students the opportunity to perform on Broadway). Dear rider will premiere on HBO at 9 p.m. ET / PT on November 9 and will also be available to stream on HBO Max. Here’s what to expect from a release:

The intimate and revealing documentary features interviews with family, friends and fellow snowboarders of Jake, including action sports icons Mark McMorris, Shaun White and Kelly Clark, as well as a wealth of archival material and personal films. DEAR RIDER pays homage to Jake’s beloved and loyal riders, the audience he has faithfully addressed every year for decades on the front page of his snowboard company catalogs. Acclaimed actor Woody Harrelson, a close friend of Jake, recounts passages from the catalog dotted throughout the film.

Inspired by the Snurfer, a strip of wood inspired by surfboards, Jake created his first snowboard in 1977 as an inexpensive alternative to skiing. From there he developed increasingly versatile boards while encouraging ski resorts, sponsors and world-class athletes to embrace what the media have dubbed “the worst new sport”. By the late 1990s, Jake’s vision had catapulted punk-infused snowboarding culture into the mainstream and onto the world stage: the Olympics.

But as Jake and his eponymous company, Burton, thrived into the new century, the entrepreneur battled two very serious health issues: Miller Fisher Syndrome, a rare nervous condition, as well as cancer, which ultimately took its toll. his life in 2019. Today, Jake’s memory lives on throughout the snowboarding community, and his wife Donna Carpenter remains at the helm of the family business.

There is a whole story to be told around Burton Carpenter, the company he founded, the impact he has had on the growth of snowboarding and the health issues he has faced in recent years. . And Villena’s past work, in particular Any of us, shows that he has experience in telling strong stories about the world of extreme sports. The interview list is also excellent, and it’s cool that Harrelson signed on to tell this. For anyone interested in the world of snowboarding, this is worth watching.